Are you discouraged from trying yoga when you see a physically agile, flexible person in a seemingly impossible, complicated pose — whether it's in a headstand, a one-handed tree pose, or a full king pigeon pose? 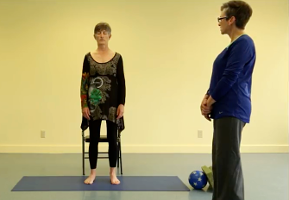 NHPC member, Marthe Murphy, a yoga teacher with a background in structural movement and yoga therapy, offers an alternative for those who want to try yoga, but who may not have the flexibility or physical strength to perform some of the more challenging yoga poses.

Marthe teaches a deconstructed yoga style that combines movement education, assessment techniques, and classical yoga. She assesses joint position and gait to help identify muscles that are contracted and tight or weak and overstretched. Movements that will correct those particular areas are then applied.

The muscles acting on the pelvic bowl are aligned first, followed by shoulder correction, then core stabilization. Muscle isolation is a primary focus in the beginning of any practice, applied with relaxed and easy breathing. Both sides of the body learn to work together.

In this variation of yoga, a person can go through a variety of seated yoga positions, or different types of classical and non-classical yoga poses that can be modified based on an individual's particular needs.

A Yoga Routine for Every Body Type and Age

Marthe encourages everyone to try yoga and gives her clients options that they didn't think were available to them. She brings yoga back to its roots as a practice for all.

"It's about learning about one's own body, learning patience with limitations, not competing, not comparing, and learning to move with stability and ease."

The Truth About Aging

In 20 years of working with seniors and those with chronic pain, Marthe has seen the significant difference yoga has made to her clients' lives.

She remembers one woman who came to her in the '90s who had a childhood knee issue and was in a brace for many years. This client had very limited movement and couldn't get in and out of a bathtub without assistance.

Within 21 days of a twice-weekly practice, she started to see changes. Pain was decreasing; its intensity and duration were improving. Her range of motion, flexibility, posture, and alignment were benefiting. After 18 weeks of classes, she had no issue getting in and out of a bathtub.

"She came back after a year and a half, and her posture had held after not doing anything. That was quite a revelation to me, and I understood once we change muscle memory, that it stays changed until stress or trauma alters it. She still practises structural yoga. I call her my poster child."

"What we call aging is not necessarily aging. We may be tired. We might be sick. We might have congestive conditions. We might have had poor posture for years. It's not aging; it's illness or old patterns that have continued on." says Marthe.

The Rewards of Teaching Structural Movement and Yoga Therapy

Take a look at our Vlog where Marthe demonstrates a yoga routine that incorporates structural movement and yoga therapy: