Access to health care in the northern territories of Canada is extremely limited. Health care centres and hospitals are only located in major centres.

With much of the northern population living in small communities hundreds of kilometres away from these hubs, gaining access to basic health care is challenging and expensive.

In the Northwest Territories, holistic health care is virtually non-existent. Finding a massage therapist, chiropractor, acupuncturist, or even yoga instructor can be next to impossible. 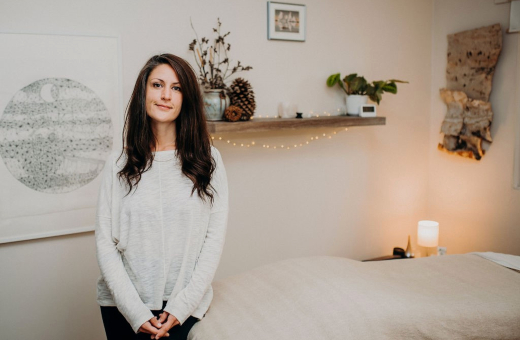 In Northern Canada, only 44.2% of people have regular access to a health care provider; that's almost 50% lower than the national average of 83.3%. For the majority of residents in the Northwest Territories, access to health care is a challenge.

"People have no access to holistic health care in the Beaufort-Delta region of the Northwest Territories. Health care is very expensive, and many people have to travel far distances to access it," explains Chloe.

Providing access to health care in the North is also significantly more challenging and expensive than elsewhere in Canada, due to the fact that many northern Canadians live in remote communities.

The same goes for holistic health practitioners. "I am not aware of any massage therapists in Inuvik and very few in the North in general," says Chloe, who witnessed this first-hand.

Chloe is based in Edmonton, AB, but after learning about the lack of holistic health practitioners in Inuvik from a visiting client, she felt compelled to offer her services in northern Canada.

She began periodically flying to Inuvik to offer massage therapy to residents. A previous client generously offered her home to Chloe to set up her clinic.

Soon after she began treating people, Chloe saw a real desperation for practitioners. "There is a huge need for practitioners in Inuvik"," she explains. "I could not keep up with the demand."

As she got busier, she began making plans to purchase a house in Inuvik where she could send practitioners to practise on a long-term basis. She is now in the process of opening Mountain Avens Holistics.

Chloe will manage the business from Edmonton and will bring in practitioners to work at the centre for extended periods of time, with the hope of providing consistent holistic health care for the people of Inuvik. Her intention is to find different types of practitioners to send up on a regular rotation.

People in the Northwest Territories face mental health issues and can't easily find support or treatment to cope with them. "The lack of sunlight really affects people", explains Chloe. "There isn't even a psychologist in Inuvik to help people".

The population of Inuvik is 60% Indigenous. Statistics Canada found that the Inuit face higher levels of mental distress due to food insecurity, lack of access to health care, and inadequate housing. Mental distress includes high levels of anxiety and depression, symptoms of which can be lessened with access to holistic health care services.

Research has found that holistic health care practices, such as massage therapy, can reduce symptoms associated with mental distress.

A large number of the residents in Inuvik are part of the Gwich’in and Inuvialuit Indigenous groups. Indigenous Canadians face significantly higher rates of disease (PDF) and death than non-Indigenous Canadians, likely due to the distance they are located from health centres, their lack of insurance, and the lack of funding for health care in the North.

Indigenous communities also face high rates of unemployment and poverty, and some cannot afford health care services. "Marginalized people do not receive the help that they need," explains Chloe. "When they try to seek help they feel they aren't being listened to."

Chloe emphasized how important it is to offer a treatment space where everyone feels safe in order to get the most out of treatments.

Before deciding to open a permanent space, Chloe surveyed Inuvik residents to determine if they would use holistic health services. The response was overwhelming.

"100% of the people I surveyed were very excited to have these services available to them," says Chloe. The majority of the residents wanted massage therapy and acupuncture, practices that were unavailable.

Chloe faced several challenges in building her business, due to the remote location. While this project would be an expensive undertaking anywhere in Canada, Chloe faced even greater financial challenges due to the added expense of shipping everything to the Northwest Territories.

Attempts to get government funding were unsuccessful, and Chloe had to pay for everything out of pocket. Added to her expenses was the higher than average cost of living and travel to and from various towns and cities. Even the cost of an airplane ticket to fly to Inuvik is significantly more expensive than flying to a destination elsewhere in Canada.

Even though Chloe is facing significant obstacles opening Mountain Avens Holistic, the overwhelming need for this type of health care, and the ability to help those in need, outweighs her challenges.

Chloe is excited to get Mountain Avens Holistics open and be able to provide continual holistic health care to the people of Inuvik. Chloe hopes to have Mountain Avens fully up and running later this year, with full-time practitioners available.

If you would like to speak directly with Chloe about her new project, you can contact her at chloe.larmand@hotmail.com.

Chloe Larmand is a massage therapist who began her holistic health practice in 2007 in Edmonton, AB. After receiving yoga training in Peru, she continued her educational journey into CranioSacral Therapy and energy work.

She has always been interested in the body and optimal health, as well as making a difference to others in her community, which drew her to working as a holistic health practitioner.

Chloe dedicates herself to her own well-being so she can assist others on their physical, mental, emotional, and spiritual health journeys.